Bespin was a gas giant in the Bespin system of the Anoat sector on the Ison Corridor in the Greater Javin region of the Outer Rim Territories. It was also a major source of tibanna gas, which was refined for production and transport in numerous mining operations including Cloud City and Tibannopolis. It was home to several million individuals, including Humans, Ugnaughts, and Lutrillians.

KNOWN BUGS:
*AI aren't the best at flying around. Not much I can do from here
*Minor weighting issues with a few hero characters
*In Hero Assault AI will sometimes get stuck in the carbon chamber lower levels 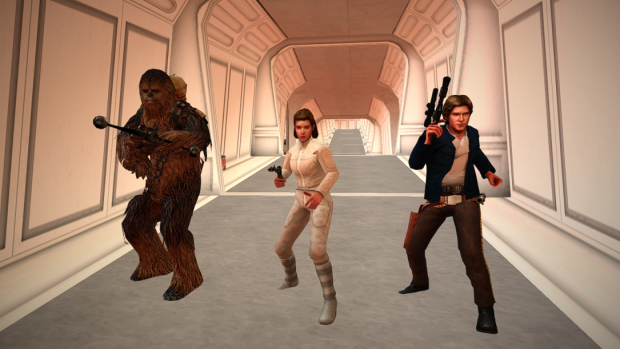 Did you use my screenshot? Well done.😉

Oh man, I've been waiting for this! Instant download!

Bespin is one of my favourite locations in Star Wars and I think it has a great potential for Battlefront maps, so I knew I had to play this map. Unfortunately, I have to be THAT guy and report a few bugs. The first issue, a minor one, is that with your conversions I keep getting that little bug which messes up the text on the spawn button (it has not appeared on other people's maps so far).
One thing that I was missing personally was the more intensive light from Giftheck's version, which added to the atmosphere. But the map is really good, and I'm glad that you brought it to SWBF2. Thanks a lot for this conversion. :)

Also, it seems that switching the weapons while playing as Rex after getting the AWARD Rifle freezes the game (and I believe that a similar bug occured in the Kamino map when playing as the Rebel and Imperial heroes).

Make sure you're running the stock game - no mods, then check again. I can't fix it unless I know what mod is conflicting. For the localization bug I still don't know what that issue is. Can you post a screenshot somewhere? Also what language to you play the game in?

Okay, so to clear this up a bit:
- I found out that those crashes during the reloading animation were a problem on my part.
- I'm currently using the 1.2 Patch sides and the award weapon crash for Rex still appears, but I guess I'll try to see if it's still there after completely uninstalling any side mods
- Here is the picture which shows the localization bug: Media.moddb.com
I've just tested the majority of your maps posted here and I can see that it appears on all of the maps, excluding Saleucami and Korriban.
When it comes to my version of the game, I'm playing two versions on 2 computers: one is the international DVD version, patched to 1.1 and 1.3, and the other one is the steam version without the 1.3 patch (the issue appears on both computers). I'd add that it affects the "Spawn" button and a few other windows (like the one with the configs), but many other buttons are not affected in any way.

Are you going to release the source files of this?

Actually, if I'm correct, the world files have been released by Giftheck on SWBFGamers who made the SWBF1 version of the map, and the new hero models used here have been released individually in the "files" section of "Star Wars Conversions" Mod page.

Thanks for letting me know Mr.Slavko! And great work as always Tean

I removed all my map sources actually. I won't be releasing any more maps source files. The SWBF1 source that Giftheck released is available, but I won't be releasing any map source files unless it was open source for SWBF1 and I ported it. With Bespin I ported all the models and Giftheck did additional work. I'm good with the SWBF1 source being all there is.

A great job as always, this was one of the maps that I most expected to see in a conversion and it is incredible, thanks for the conversions of great maps to battlefront 2