This is a small alien survival map i made alone in VHE. I made it just to practice my mapping skills.

The first version of this map looked exactly like in this version, but the first one was glitched and there was a different entity in the canyon part. But, this is an improved version, no glitches or bugs, now with sounds!

I can tell you why was the 1st version of this map different of this new one:

-there were no sounds
-there was a spawn-in-wall glitch
-if you didn't recharge your HEV suit at the beginning, the explosion in the enterance of the canyon lab would kill you if you were low on health

There is one little thing gone wrong in this map:

that explosion would kill the alien slave behind a wall. 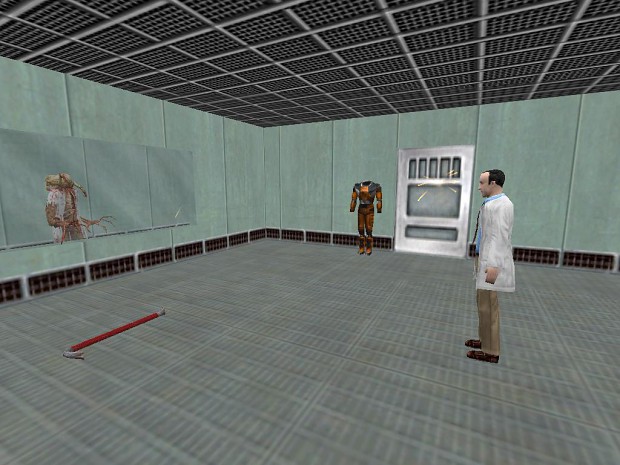 I assume this is one of your first maps, and for that, its pretty decent. However, I realize mapping is a hard thing to master, and thus I'll be gentle with my critisims.

First off, there is no lighting, it is completely full-bright and all the rooms have no lights in them to begin with, fix this. Second, there is no detail, no props, no designing, they're simply hollow'd out squares.

Third, you need better item placement, why is a mp5 just randomly laying down? Why not have it near a dead guard or dead hgrunt, why is a 357 just randomly around? Yet again, needs a better explanation. Why is there 357 ammo randomly in a vent too? That is very very random.

Fourth, your map is too small and paces quickly, none of its designs or ideas are fleshed out or "mature", you quickly go from a tiny hallway with 1 room, to a sewer, to an outside area, to another lab.

Fifth, your Brushwork itself is sloppy, you should clip the water, you should never make a giant walled in skybox around a map too.

I really like the basic idea of this, and its not that bad, and it shows some promising ideas and talent, but you need to work on it.

I suggest signing up at Halflifezone.com A lot of people there (I included) have been working on the Half-Life engine for years and thus can offer lots of help and resources. Including tutorials

I just made this map to practice my mapping skills.

I realized that the map was so bad. I don't know anything about lights, and i just randomly put the weapons because i forgot to put dead bodies.

one question how can i open this map???